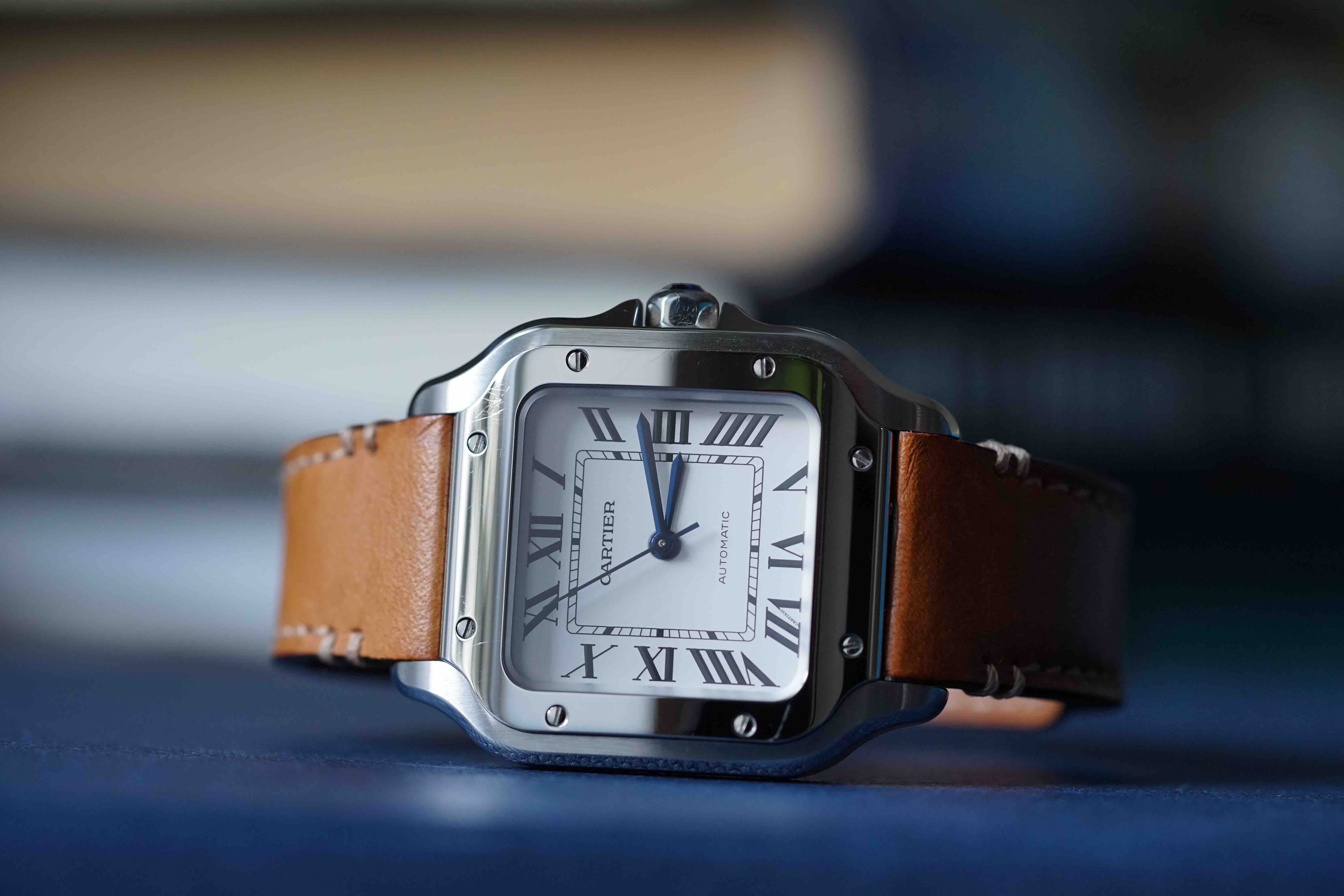 In 2018 Cartier re-envisioned one of their oldest and most popular models - the Cartier Santos. I picked it up recently, and what follows are my first impressions.

The Santos is a historically significant watch, with a legacy worth recalling. The namesake of Alberto Santos-Dumont, the watch was present on his wrist for his crowning achievement in 1906. That achievement was the first unassisted heavier than air flight.

The story was set in motion years earlier, in 1900, by French petroleum tycoon Henri Deutsch de la Meurthe. Henri announced the prize of 100,000 francs to any successful pilot making a round trip between Parc Saint Cloud and the Eiffel Tower in under thirty minutes.

With his pioneering spirit, in October 1901 it was Santos-Dumont who took the prize, crossing the finish line in his dirigible balloon to make history. Perhaps it was during the celebration of his achievement that Santos-Dumont mentioned to his friend Louis Cartier the need for a watch to be worn on the wrist instead of in the pocket. To Cartier, he would have explained the impracticality of a pocket watch for his purposes, citing the near constant need to use both hands for piloting his aircraft, with no time to check a pocket watch.

As history goes, in 1904, Cartier would present the very first Cartier Santos to Albertos Santos-Dumont, fulfilling his desire for a pilots watch to be worn on the wrist. Santos-Dumont would go on shortly thereafter to make aviation history with it adorning his wrist.

Cartier hasn’t always been a brand I freely associated with men’s watches, and certainly not men’s watches I would consider owning.

The first Cartier I saw in the wild, as far as I remember, was a Tank. I was on an uptown train on a hot summer day in New York two years ago. The watch was on the wrist of another rider, a man who appeared in his mid-40’s. When he reached out to grab the rail, his watch caught my eye. I remember my first impression was how perfectly it fit. It was gold, itself thin, on a thin brown alligator strap. The effect of its age beginning to show on its polished surfaces serving only to make the watch appear more charming atop his wrist. Above everything else, I remember how comfortable he looked in it, as if it were a complete afterthought.

At the time I wasn’t very interested in owning a dress watch, but the experience of seeing it stuck with me. 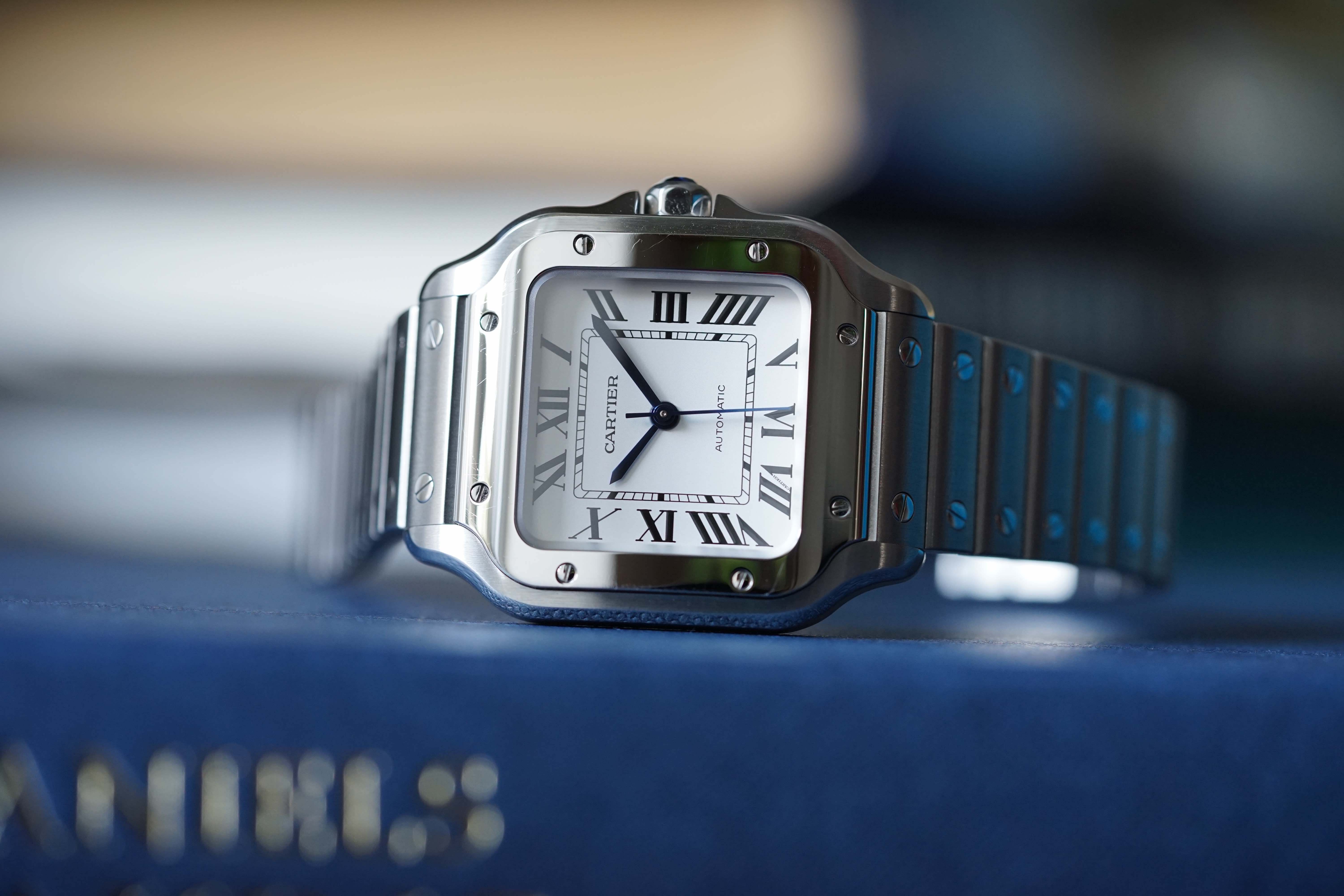 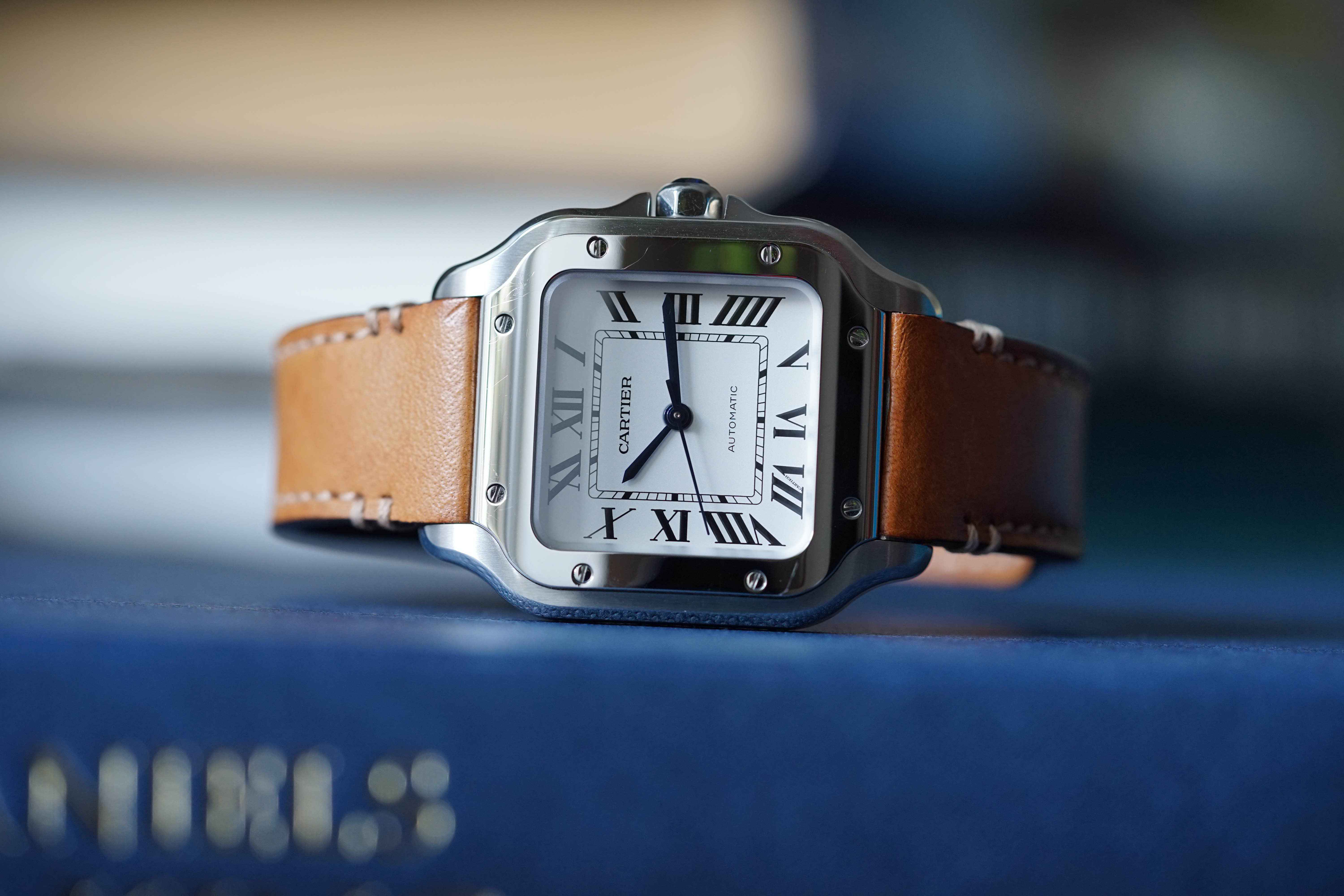 I’m always looking to get the maximum versatility from a watch. This is in part why, until now, I’ve steered away from dress watches.

The updated Santos excited me because an iconic watch was being re-released on a bracelet, included a strap, and offered a range of colors. Here I thought I might find the versatility I was seeking, and the comfort I recognized so two years earlier. 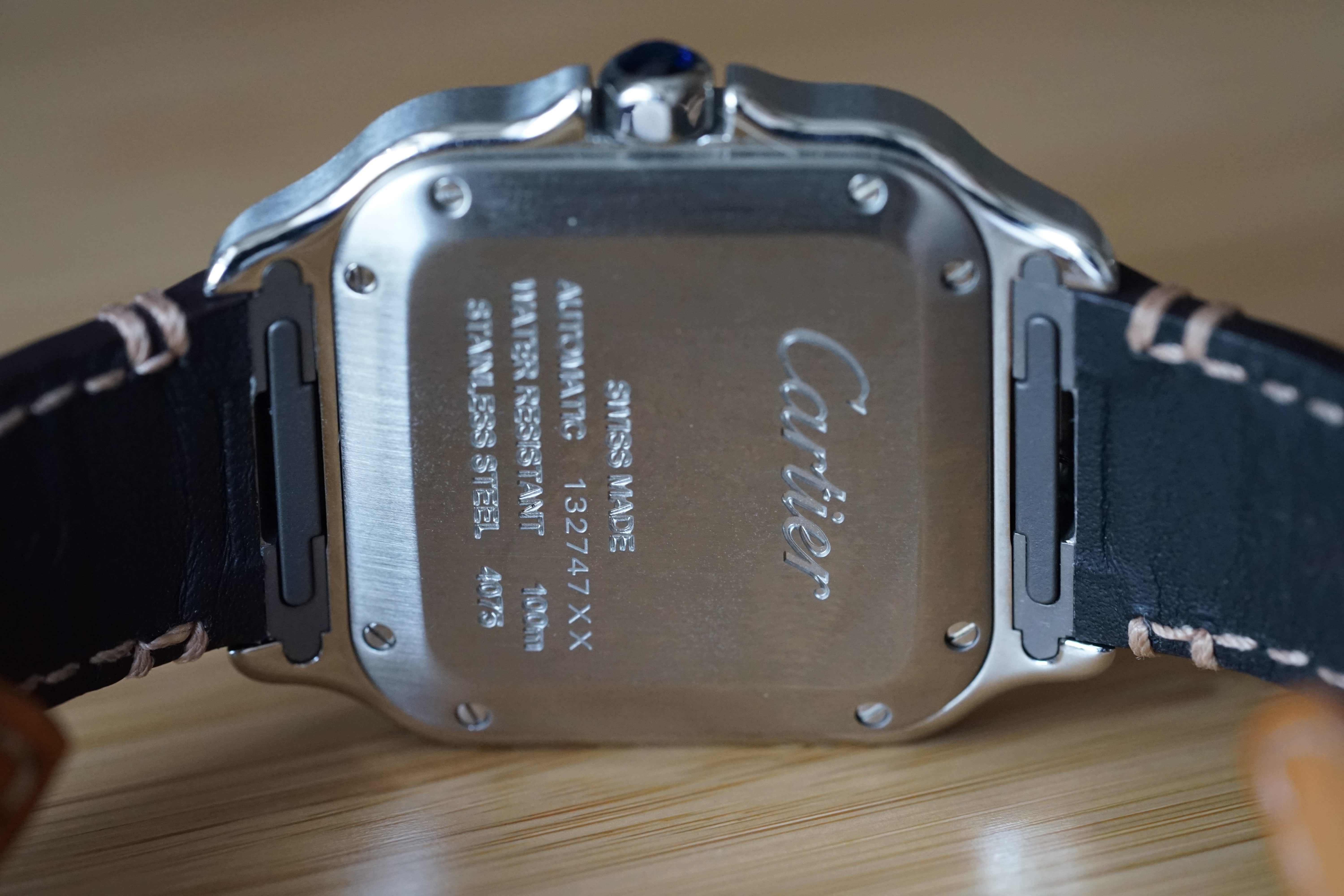 Cartier has integrated their Quickswitch system into the lugs of the Santos. This update serves to make changing the strap or bracelet easier by removing the required tools. It took a few tries to master, but ultimately I love it. In the same way I felt after using Rolex’s Glidelock, I feel the same about Quickswitch. I could easily lose my spring bar tool and never find a moment to miss it.

I typically prefer wearing watches on a bracelet, but to avoid dragging it across a desk all day I wear a strap during the week. With Quickswitch, round trip from strap to the bracelet is sub-fifteen seconds. This makes swapping on Friday evening and back again on Sunday a breeze. 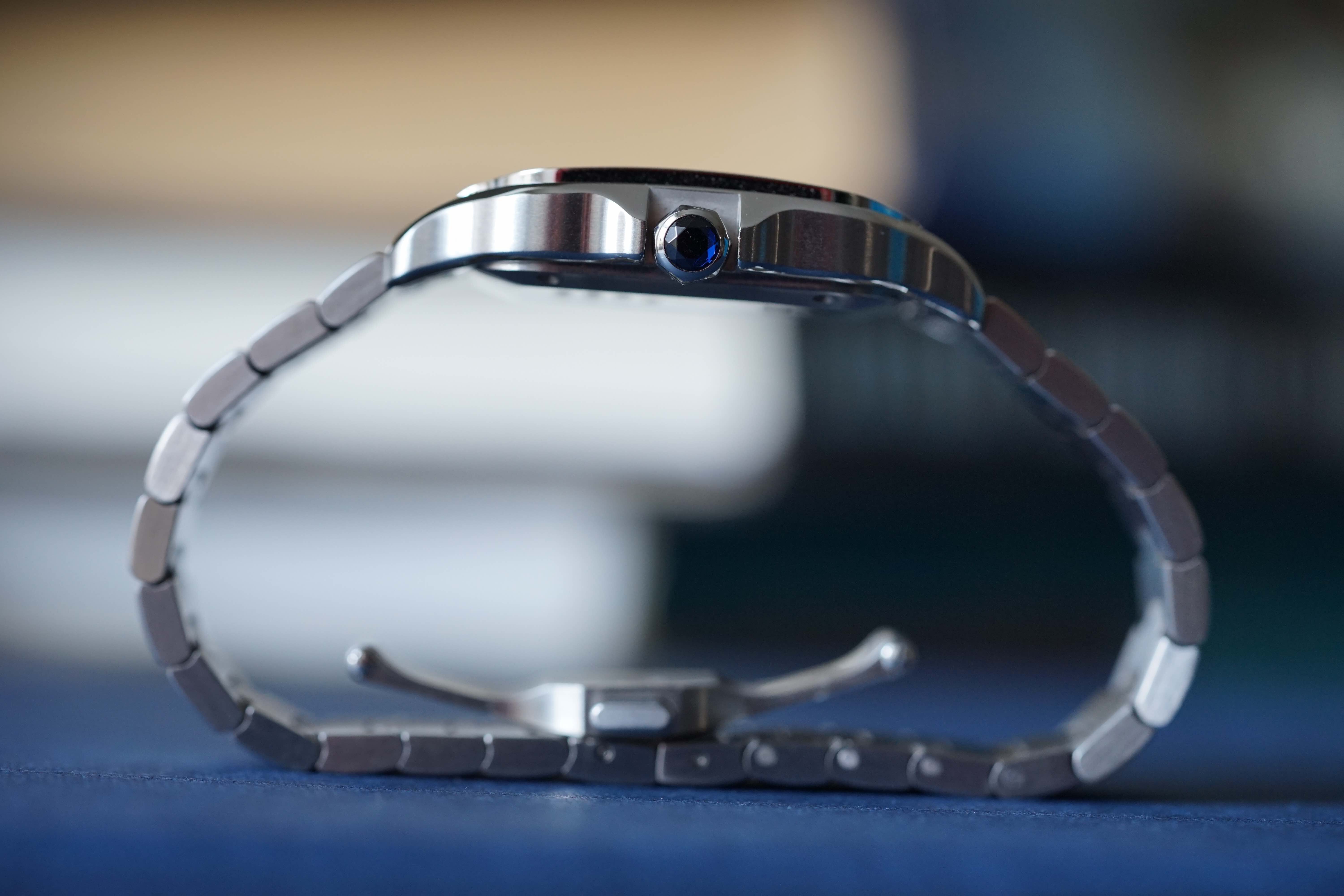 The case is constructed from stainless steel, with a mix of well-done brush and polished finishes.

The medium model measures in at 35.1mm wide, making it the smallest watch I own. The square case has the effect of making the watch feel larger than it is though. On my wrist, I feel as if I’m wearing a 40mm watch. Prior to seeing it in person, I was set on the large model which is 39.8mm wide. In the flesh, the large model appeared too big to stomach, and ultimately I was happy with the smaller configuration.

Aside from the distinctive screwed down bezel, the best feature of this case might be its height. At 9mm, it means the watch easily disappears on your wrist even when wearing a t-shirt. The thinness of the case gives it a feeling of elegance and ultimately contributes to the overall comfort of the watch.

You won’t see through the case back into the movement on the Santos, which is fine by me. 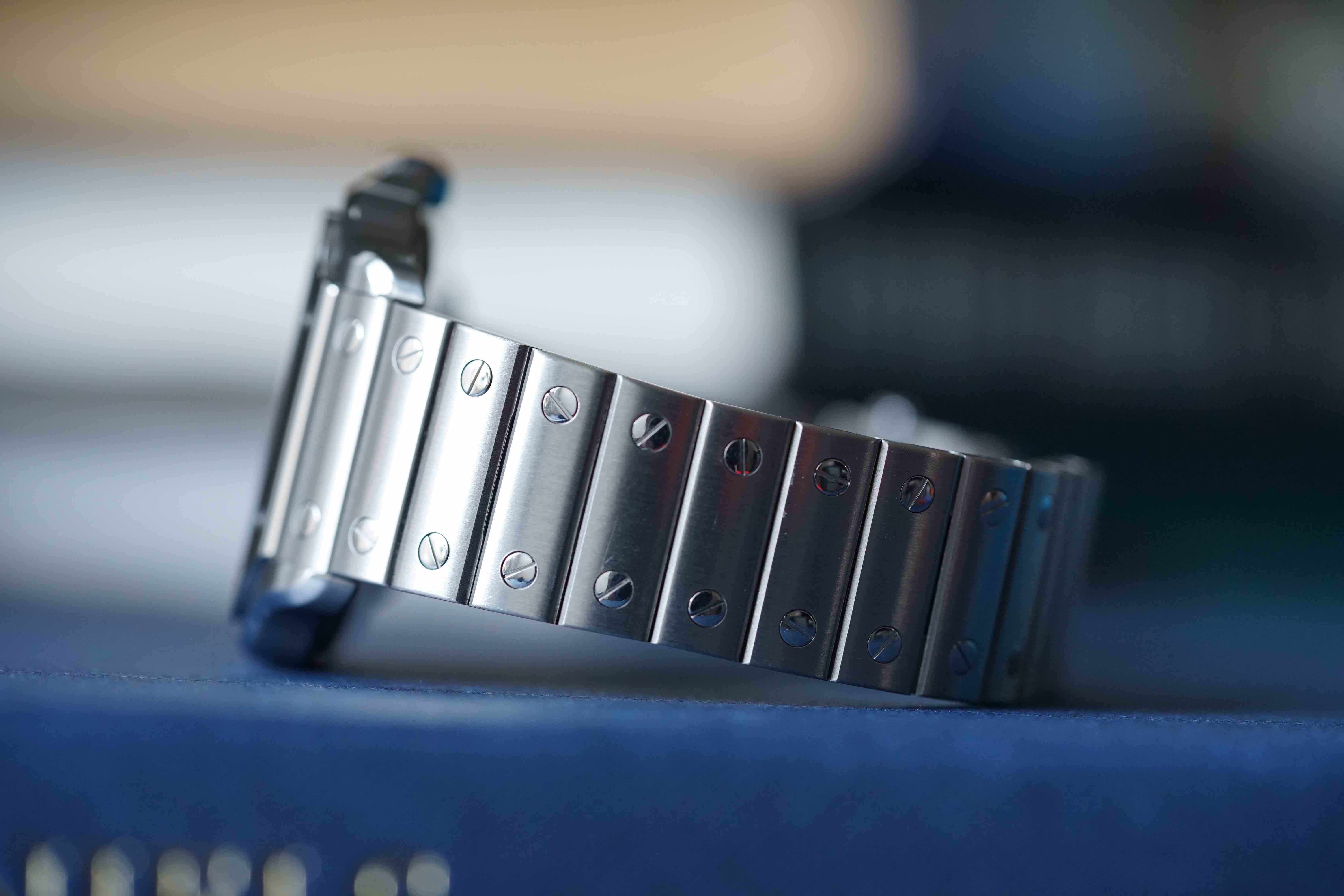 The bracelet is 18mm at the case tapering and tapers to 16mm at the clasp. It fits my 7.25” wrist perfectly with 12 links on each side. The exposed screws along the bracelet are an additive design feature, and I think they elevate the bracelet’s appearance into a higher price tier. To the chagrin of some perfectionists, the screws are arranged in a random orientation - this I enjoy.

The clasp has been altered from the prior model. In the new model, Cartier has opted to hide the deployant more discretely behind the bracelet, a design originally conceived of by Louis Cartier himself. 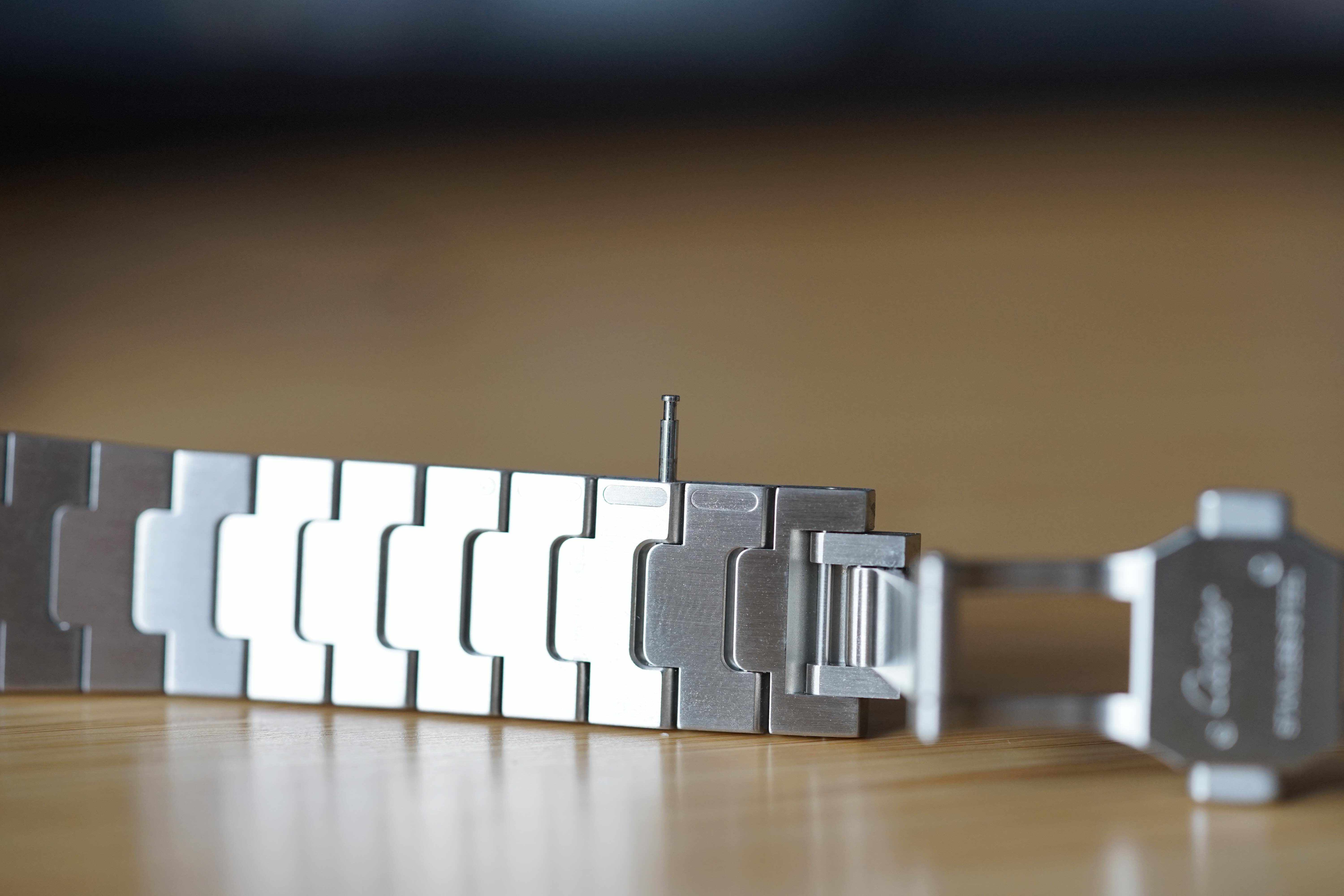 The SmartLink integration allows you to add or subtract links without tools, but the reality is you’ll only use it once to find a fit. There’s no micro-adjustment here, and adding a single link only would throw off the symmetry of the bracelet leading to a weird fit. This is a risk for prospective owners to be aware of, and I encourage you to try it on, sized, at the dealer. 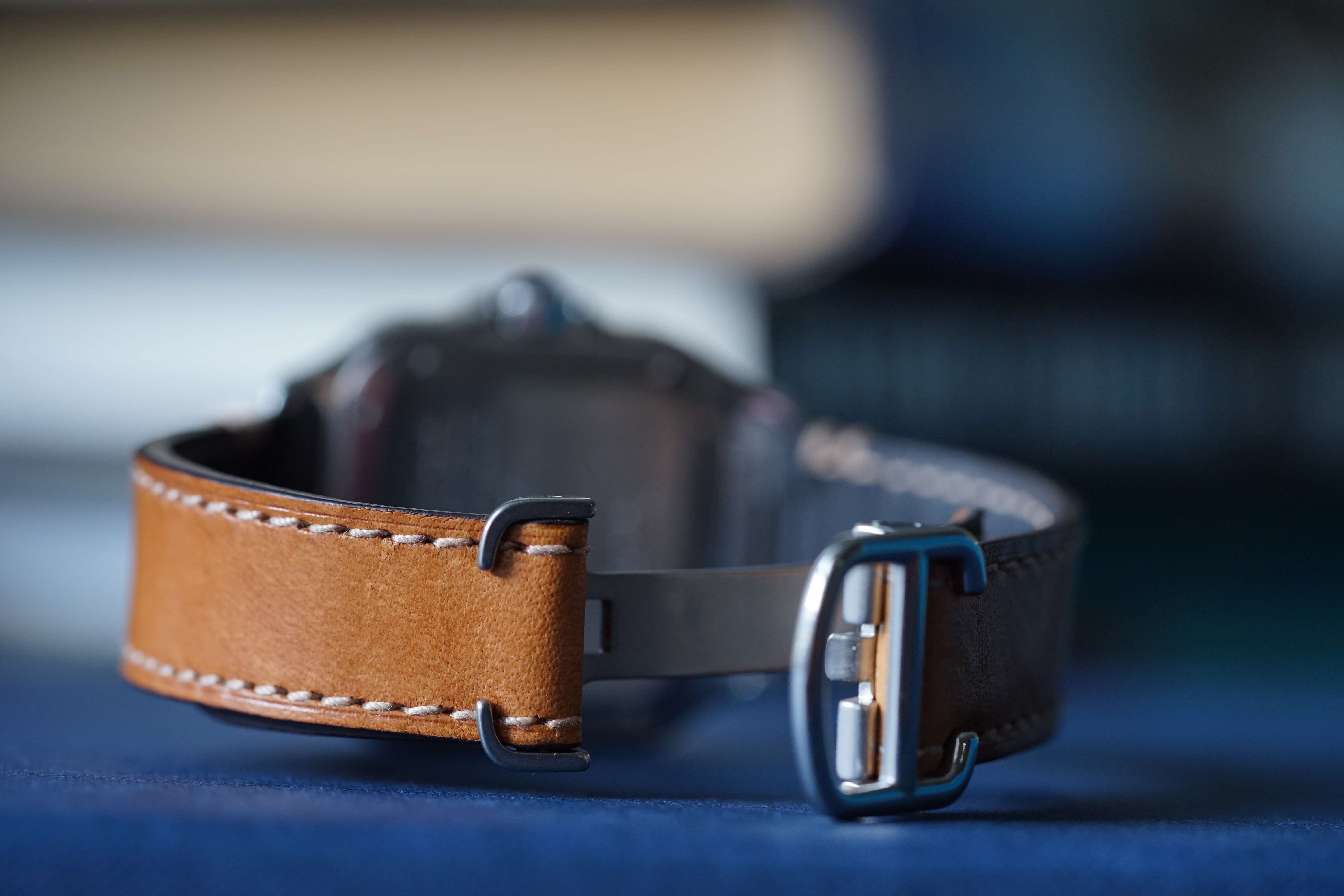 A majority of the mileage on my Santos to date has been on the strap. The strap supplied with my watch was tan leather and came with an adjustable folding buckle.

For a newcomer like myself sizing the strap with Cartier’s deployant was not straightforward by any means. Cartier provides a useful video on how to size the strap, but I, unfortunately, discovered it after figuring it out the hard way.

Once sized, the strap is a charm. It’s another reminder to myself the excitement of discovering new features in the flesh. Cartier is well known for the quality of their leather goods, and the strap carries this reputation well. It fits seamlessly into the lug system, and I have a feeling it will age very nicely.

I’m curious to report back on the durability of the strap, given its new design and integration into the Quickswitch lug.

For 2018, the watch is powered by the in-house Cartier 1847 MC movement which also powers a number of other watches in the Cartier lineup. I’m not aware of any enhancements that make the movement particularly special other than the fact that it’s in-house. It’s equipped with a standard 42hr power reserve, is anti-magnetic, and appears from stock photos to be modestly decorated. No materials I’ve seen have indicated the watch’s accuracy ratings or certifications.

Held close to the ear you can hear the mainspring wind when you give the watch a flick of the wrist. Tapping the watch gently at a similar distance you will also hear feedback from the movement. Both are inaudible on the wrist. These observations are non-existent for other in-house movements like the Rolex 3130. Maybe it’s unfair of me to compare the two, but if a movement wears the in-house moniker I’m inclined to judge it against its peers.

This leaves me to wonder if I really care that the Santos sports an in-house movement and whether the extra investment is worth it. Would I be less excited about the Santos if it were powered by an ETA movement? I don’t think so. 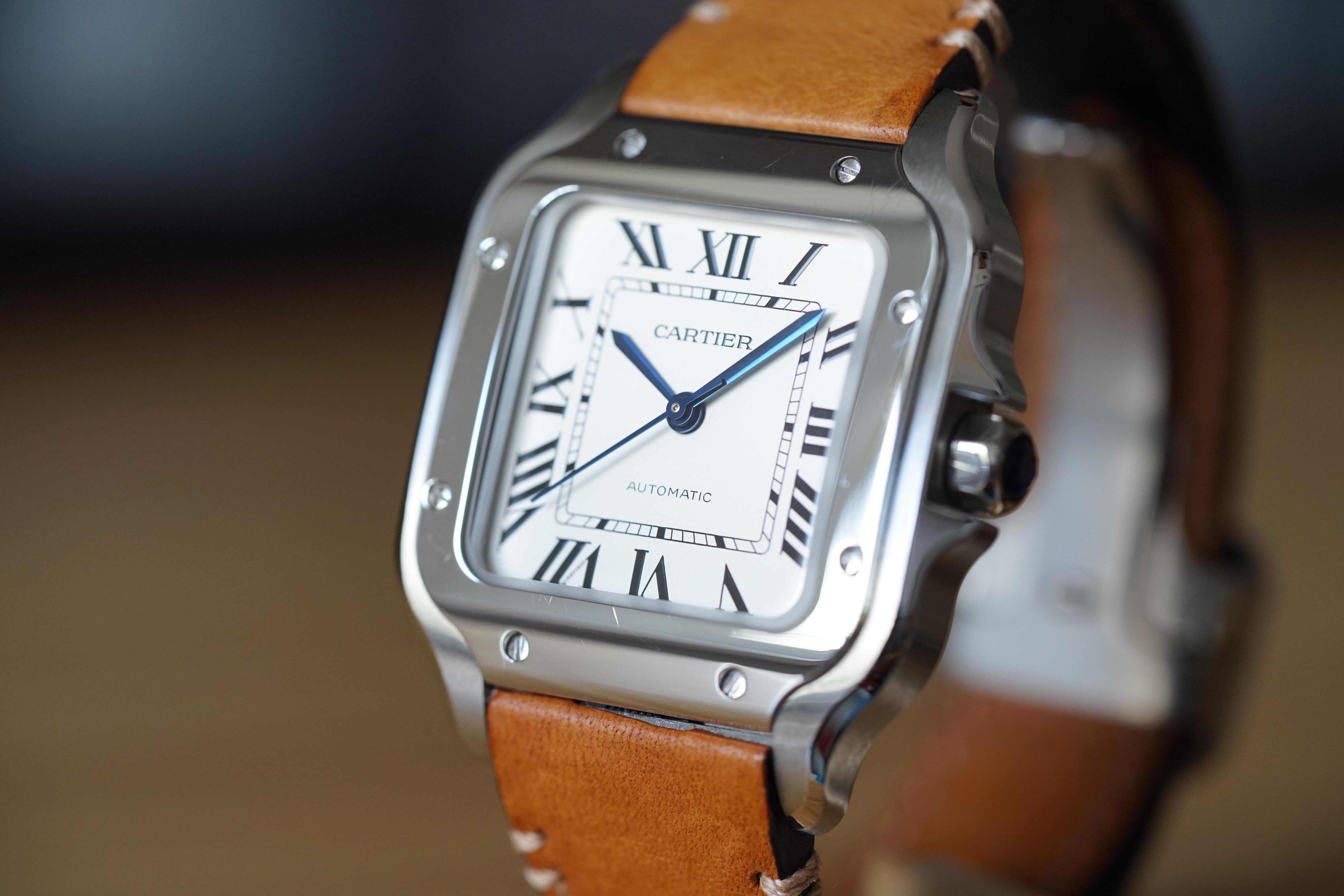 The dial is a milky silver opaline painted with black Roman numerals along the railroad minute track. Three hands with no date keep the dial configuration simple and easy to read. The blued stainless steel hands reappear in this update, replacing black lumed hands on the Santos 100.

The dial staring back at you is a combination of colors that mesh perfectly - blue, silver, and black set inside polished and brushed steel. For me, the simplicity of it all adds to the effortlessness of wearing the watch. 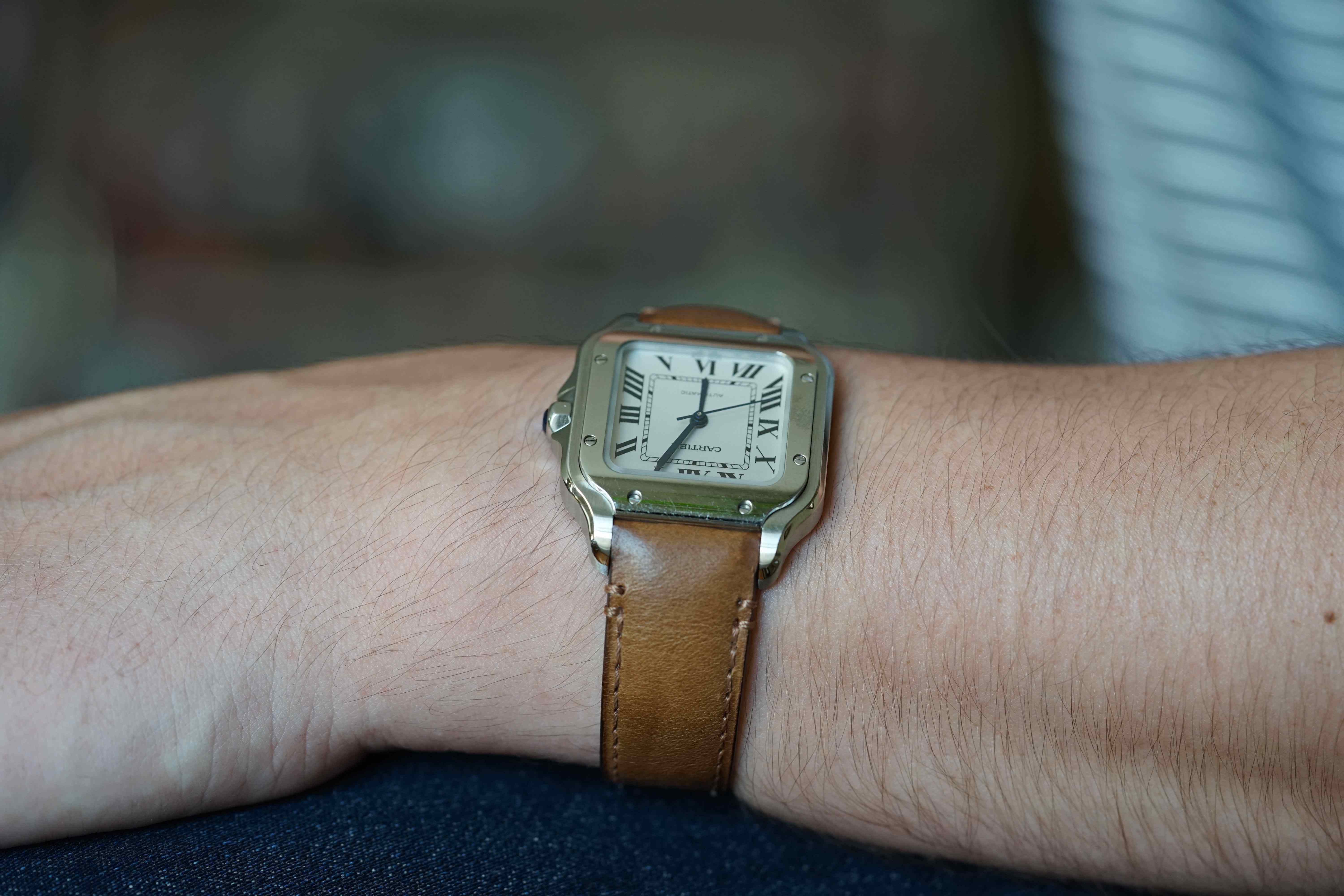 The Santos de Cartier for 2018 is a faithful homage to Santos’ of the past. Cartier has dutifully resisted the urge to change too much and has landed squarely with a great addition to their lineup. It’s legible, comfortable, and versatile.

The Santos sits in an interesting price range. For $1,250 extra, you could be wearing a brand new Rolex 114060 (if you can find one). But despite its proximity in price, I’m not sure the watches directly compete for most buyers. What the Santos lacks in prowess, it makes up for in elegance and beauty.

That being said, at this price point you’re well within the range of Jaeger-LeCoultre’s Master Control Date - a much (much) harder choice. It’s can easily be argued that the Master Control Date is more watch for the money, take the movement alone. Despite not being able to compete on the movement front, the Santos defends its territory well with heritage, design and the additional versatility of strap and bracelet combos.

I’m excited to continue getting to know the Santos over the coming weeks. The watch is a component offering from an old watchmaker. It’s refined, tasteful in design, and suitable for all occasions.