There’s no doubt that the Rolex Submariner is part of a special class of watches. In the 65 years since its inception the Submariner has accumulated over 25 references and amassed a cult-like following around the world.

It’s popularity today is only surpassed by record prices for new and used models. With waiting lists full of buyers you wouldn’t be alone paying more than a few grand over retail on the grey market. Going vintage won’t save you either - they’re going just as fast and at no discount. Prices rise hastily from $10k and you can easily throw down tens of thousands for coveted references.

It’s unlikely that over 65 years ago Hans Wilsdorf could have imagined the kind of legacy that was in store for his Submariner. At the time, the watch was a tool to keep underwater explorers safe. Today price tags and fashion trends would put true submariners in the minority of owners. Those sliding a Submariner on the wrist today are more likely concerned with cuff clearance than water resistance. That’s not to say it wouldn’t be up for the job if put to the test.

Since its inception technology has enriched the Submariner. It now houses an in-house movement, a proprietary hairspring, 904L stainless steel and the latest ceramic composites. Despite the differences the modern Submariner remains true to its original purpose - a simple, purpose-driven tool that is above all legible and reliable. 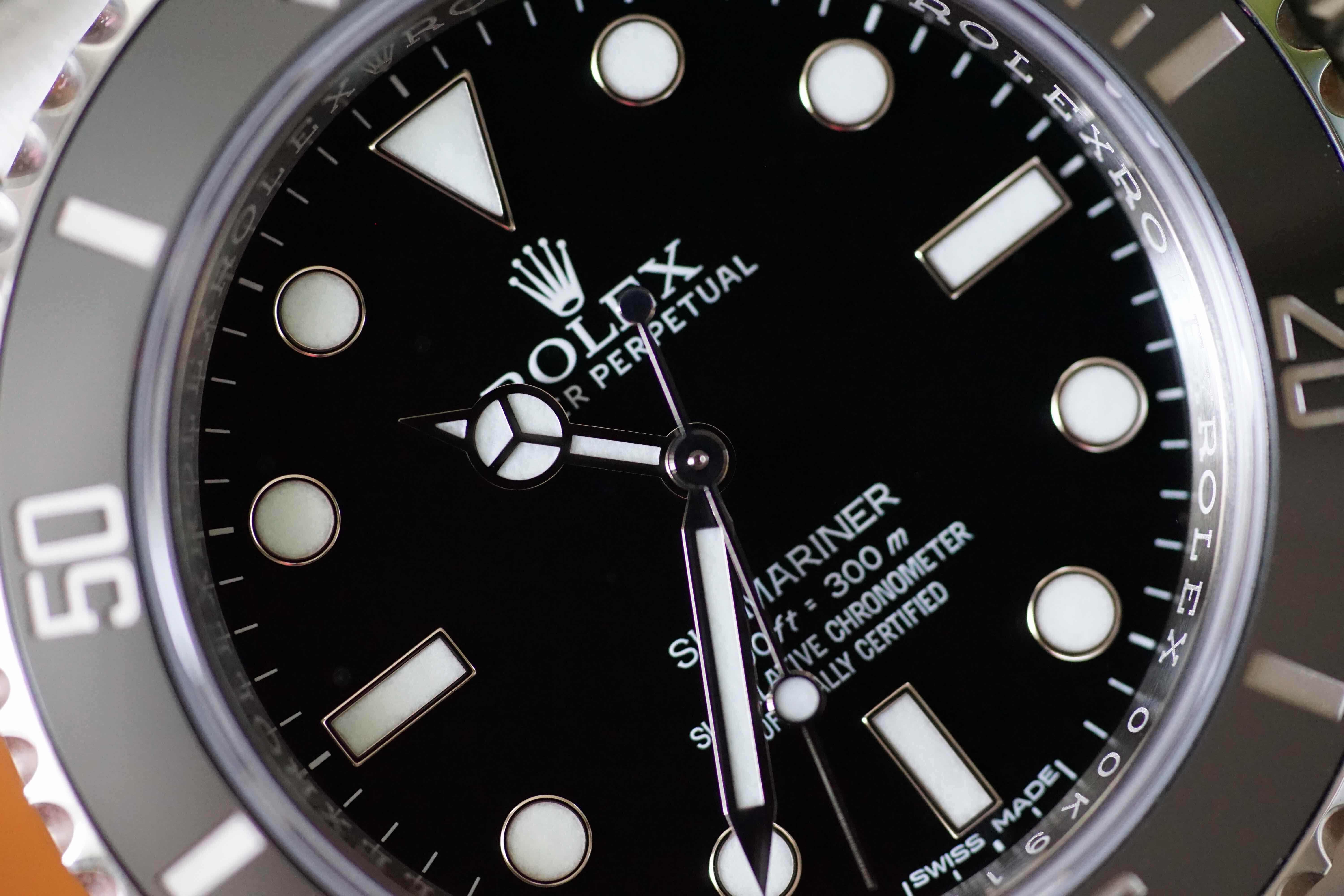 If anything has come to define a Submariner, it’s the design of the dial. Prominent hour markers are set against a black dial with a simple three hand display. Foremost designed for legibility it comes through as understated and purpose-driven.

The most evident updates to the dial have been to the handset and indices. “Maxi” has been in Rolex’s design language for years, but with the 114060 they’ve put it into overdrive. Where we once had dainty lume dots we now have white gold towers. Tritium replaced with SuperLuminova. And a few lines of text with what some might call a paragraph.

Together, these new features give the dial a condensed and masculine feeling. There’s less negative space for the eye to wander in. The blackness of the dial creates depth, relinquishing space consumed elsewhere. The contrast white gold and black gives rise to supreme simplicity.

There’s healthy debate on the amount of text that’s acceptable on a Submariner dial. Here, the text at the top of the dial hasn’t changed much, it’s the bottom where the action happens. Looking back in time you’ll find two lines, red accents and Comex variants among others. Here we have four lines - indicating the model, depth rating and its chronometer certification. Some argue for the simplicity of two lines but I don’t mind four. 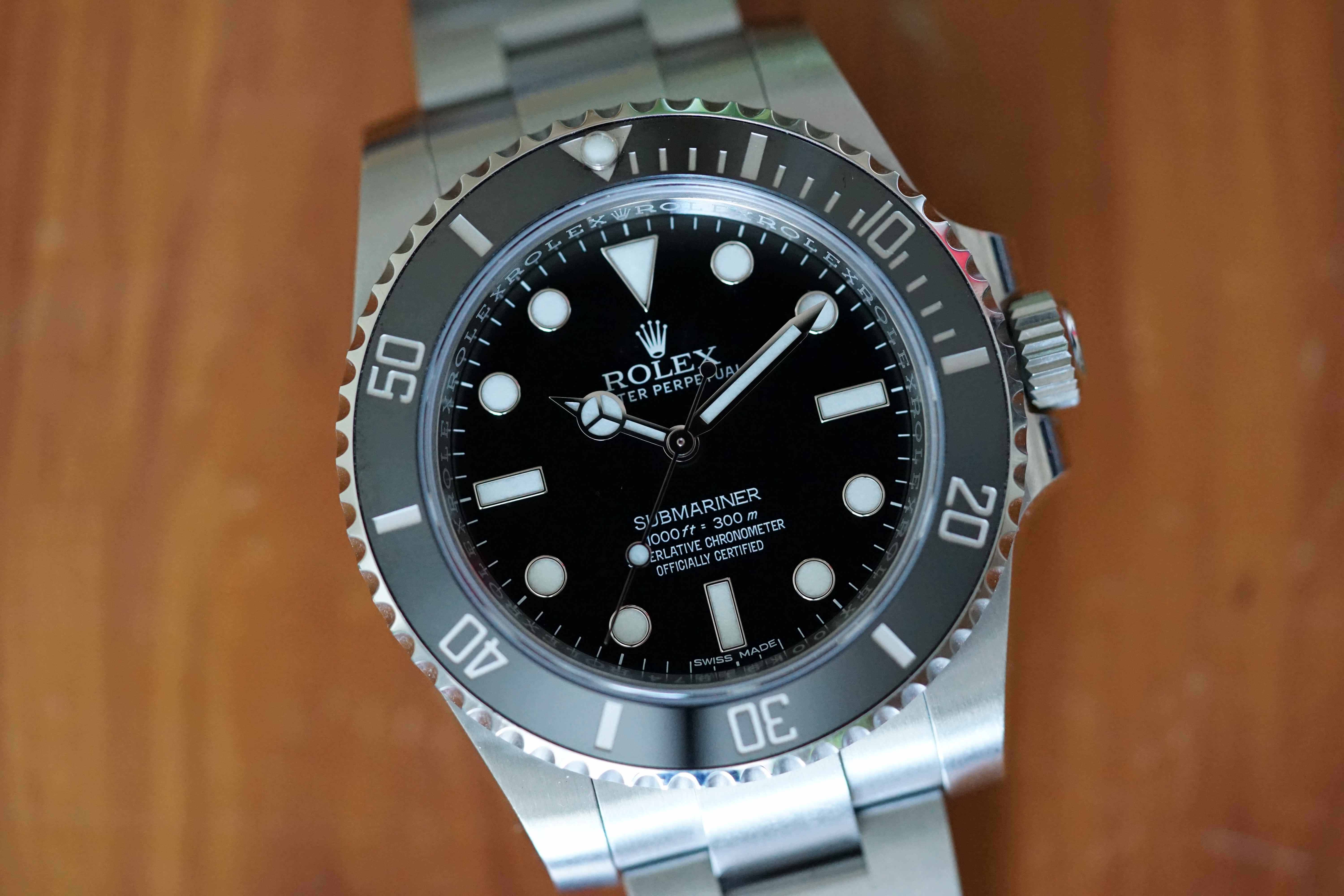 If the Submariner had a cornerstone I would say it’s the bezel. It’s the bezel that enabled divers to measure elapsed time and ensured they returned to the surface safely.

Rolex design evolution happens at a snails pace compared to modern technology. Until the 114060’s debut, the Submariner’s bezel had been largely unchanged for decades. Revisions, when they did occur, were usually isolated to font and imperceptible to the average person. On releasing the 114060, Rolex replaced the traditionally aluminum bezel with Cerachrom. The update improves scratch resistance and makes the bezel a lot flashier.

Vintage enthusiasts go nuts for a faded bezel. It’s one of the hallmarks of a well worn watch. It’s also one of a handful of features that will push prices into the upper atmosphere. This, however, is a something that will likely never accompany a 114060 into old age. Far more likely it will be to suffer a crack before a scuff or fading.

It’s tough to say whether this is good or bad. Will this reference emerge from 30 years of use looking worn except the bezel? Rolex dials and bezels are known for aging in wildly varied ways. It’ll be interesting to see how this new model ages.

There is one gotcha when it comes to this bezel that a prospective buyer should be aware of. Rolex seems to have a hard time aligning the bezels lume pip with 12 o’clock on the dial. I’ve found that perfect alignment sits smack between two clicks of the bezel. Originally I found it frustrating but quickly forgot. On forums you’ll find it’s a common issue and something to scrutinize whether buying new or used. 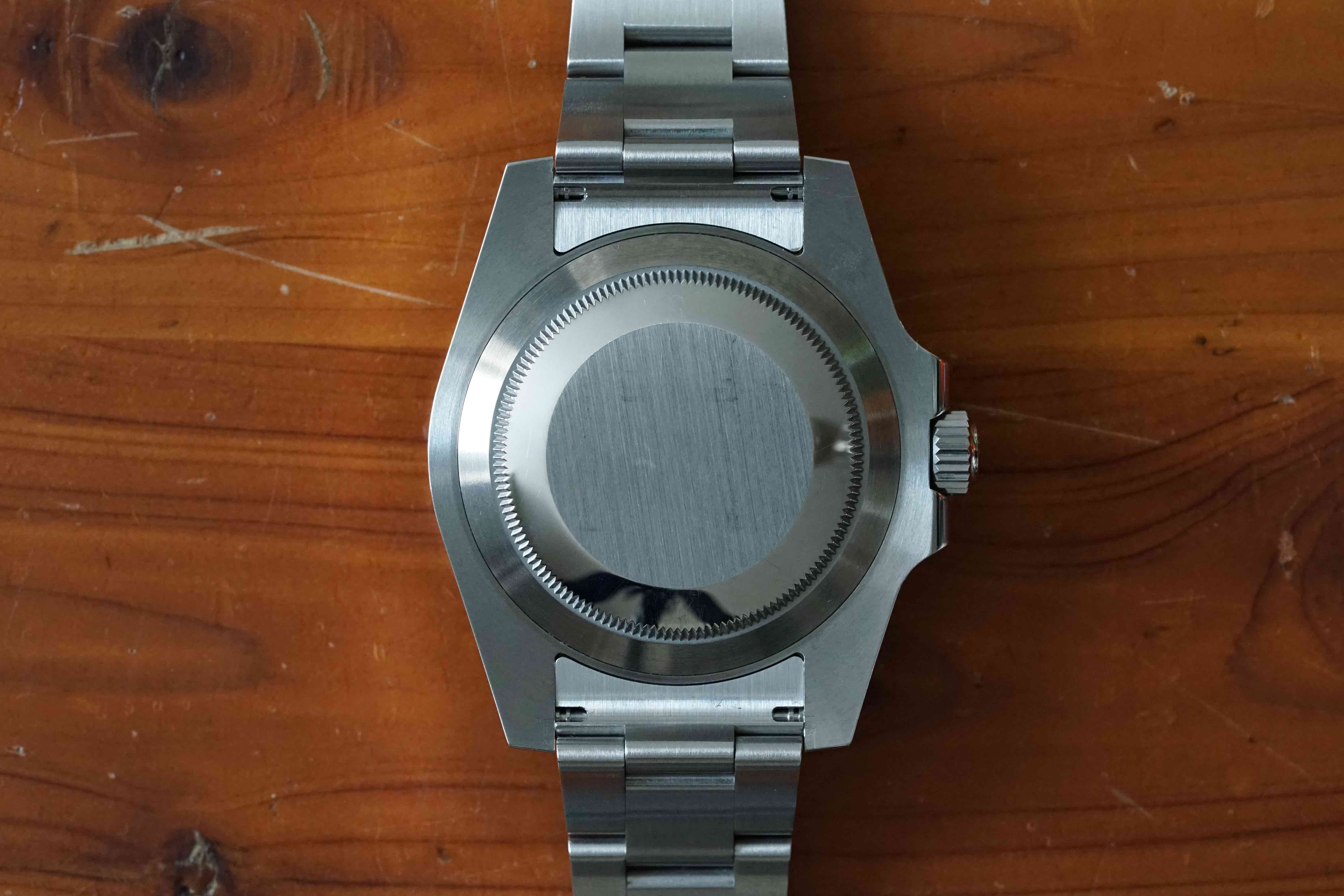 The case extends the maxi design philosophy. It’s distinguished by wider lugs, sharper edges and flatter sides. There’s no mistaking this extra material, both visibly and on the wrist.

Despite the heft it maintains a 40mm case diameter. Measuring the case leaves you searching for missing millimeters compared to its predecessor. Similar dimensions somehow inhabit a completely different space on the wrist. This is due in most part to lug width overflowing onto the dial and bezel.

The height of the watch is just under 13mm and helps to tame the sprawling case. That alone isn’t enough to overcome the fact that this watch that feels larger big. All in, at times it can feel a little much.

Beveled edges are a thing of the past for now. The sharp edges of the case and lack of lug holes promote its big and bold presence. On the wrist, the case is decidedly less elegant than its older brothers. Part of the elegance of an older reference comes from age but a sleek case works wonders on the eye.

The case back, as with a majority of Rolex models, is void of wording or windows. This is a statement by Rolex that I appreciate. The tendency to show off a movement for the sake of doing so is a hallmark of a watch insecure in its own skin.

Brushed and polished surfaces offer the ability to dress this watch up and down. You’ll find it looks just as good in all configurations. That’s definitely one of the appeals of a “luxury” sports watch. 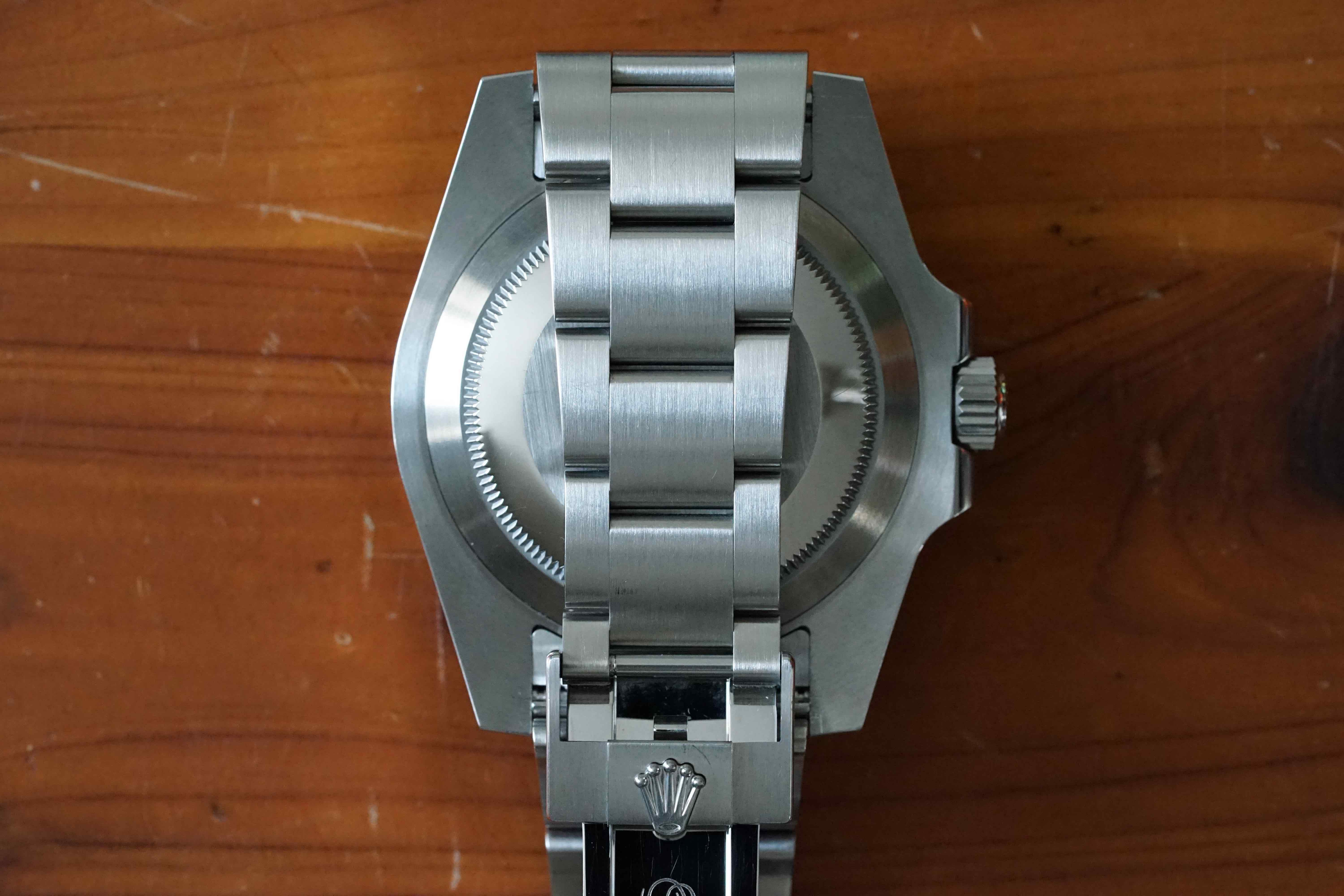 If the dial is a Submariners most distinguishing feature, the bracelet is a close second. It’s another element that makes the Submariner instantly recognizable. It’s a design equal parts comfortable, practical and functional.

The bracelet of this reference has undergone significant changes model over model. The 14060M is the last reference with which you’ll find stamped parts. Stamped metal of the past now give way to solid milled steel.

Real attention to detail has been paid to the design of the clasp. The safety lock is fixed in place with ceramic balls - less prone to wear than steel. On prior models friction held the clasp secure in the closed position. Now a new sprung lever mechanism latches the clasp in place. It’s a simple and clever update on decades-old design that enhances the secure feel of the watch on your wrist.

Rolex also integrated their Glidelock system into the clasp. This allows for easy sizing adjustments. As your wrist swells during the day, you can take the watch off, adjust bracelet size with no tools, and put it back on. Once you start using a Glidelock bracelet you will find it very hard to forego it.

The charm and warmth of older Oyster bracelets has been lost with these updates. On the wrist, there’s no doubt you’re wearing a solid piece of metal. Tight tolerances have castigated the familiar rattle as the bracelet moves the wrist. In its place, you’ll find a bracelet that feels unified and firm in its construction.

The Oyster bracelet is one of my favorite features of Rolex sports models. Its understated visual appeal and functionality is an indispensable ingredient that makes the watch more than a sum of its parts. 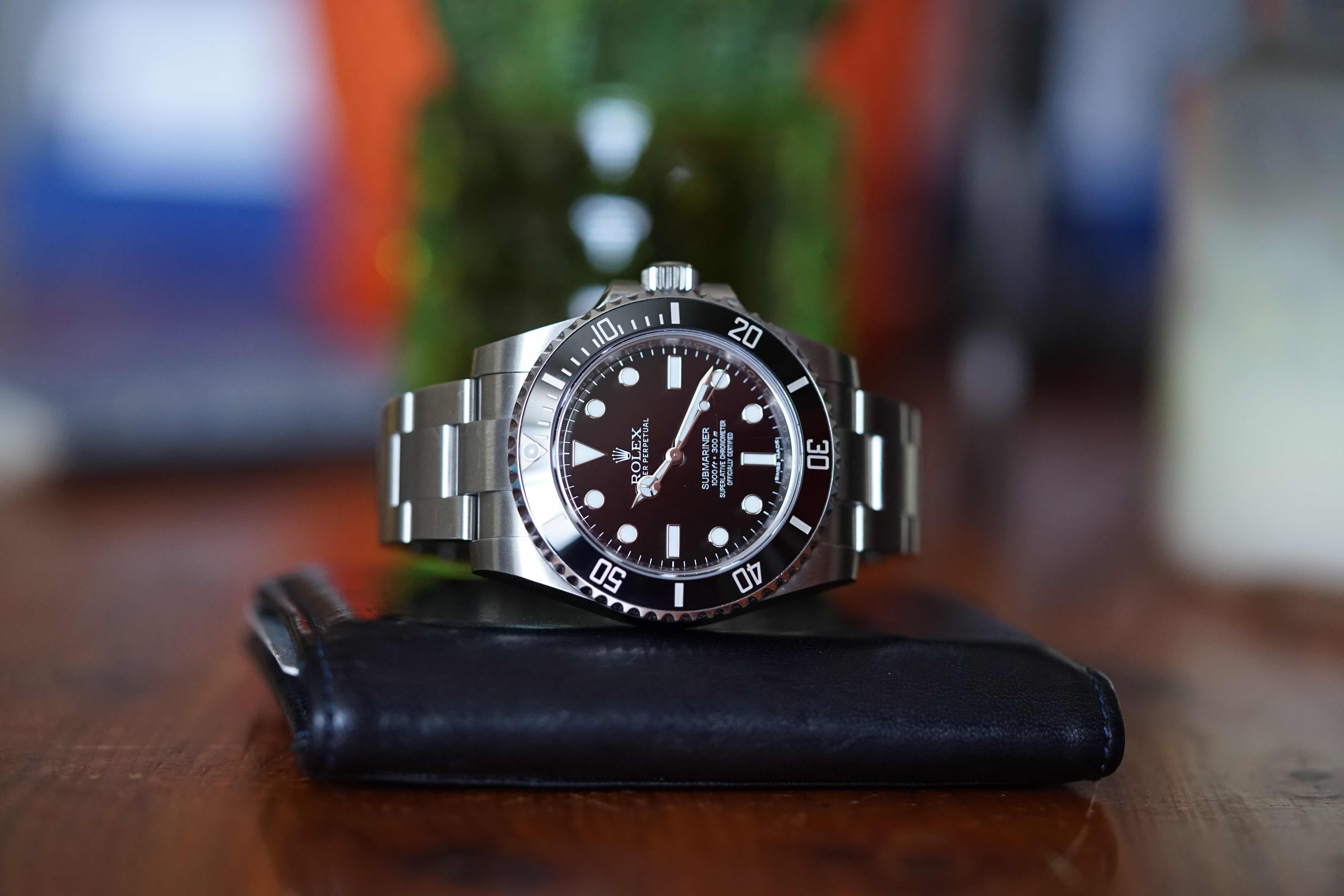 Prior to owning the 114060 the top contenders for a spot on my wrist were the Tudor Pelagos, the Black Bay and the Tudor Submariner (79090). The 114060 served as my introduction to “luxury” sports watches and confirmed my passion for watches.

Over the last few years, the previously mentioned watches have met new owners but the Submariner remained. For me, the three watches all summed to the versatility of one watch, the 114060.

Outwardly, the appearance of a watch like this can signal all sorts of things about a person. To this point I take solace in wearing the slightly more conspicuous and less well known no-date reference.

Originally, the 114060 appealed to me exactly because of this. It rang truer to its heritage and flew slightly under the radar. It turned out to be a great companion. It’s reliable, functional, and masterfully crafted.