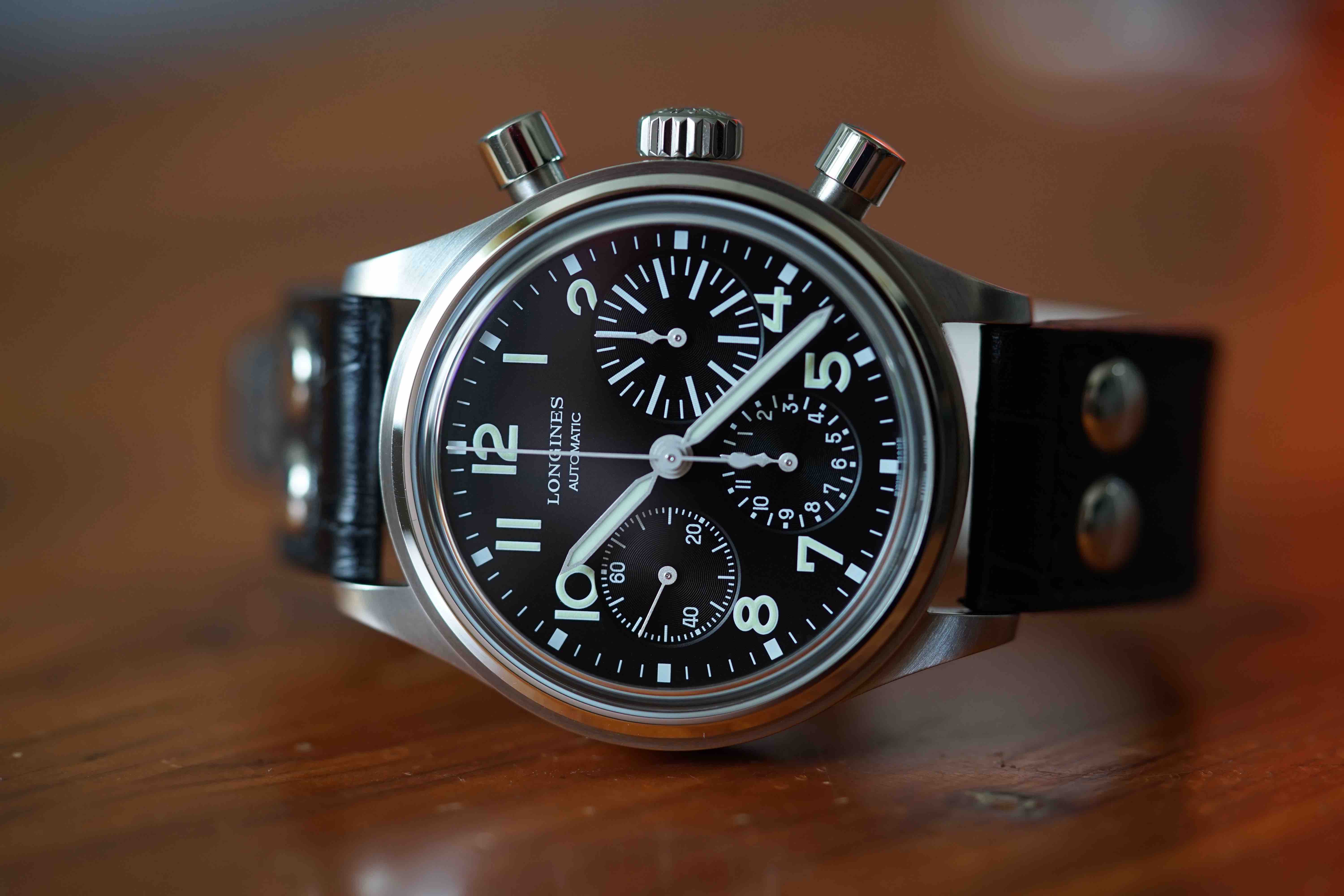 It’s no secret that vintage is in. One look at the used Rolex market and you’ll get a sense for the level of frenzy. These prices spark interest, and price many buyers out. These rising tides have driven watchmakers to expand their offering in hopes of capturing a slice of the pie.

The flood of rereleases and heritage lineups on the market today is in direct response to the vintage trend. The value proposition they make is clear. Get the vintage look and feel with the most modern technology Switzerland has to offer for a fraction of the price.

Tudor most successfully brought the Black Bay to life in 2012 - an homage to Submariners of past. This year at Basel Rolex unveiled their new Root Beer GMT-Master II. Unsurprisingly, other manufacturers have something to add to the conversation as well.

By all accounts their Legend Diver, a homage to the Longines Diver reference 7042, has been a smash hit. Many watches in their lineup combine history and design with affordability. The Avigation Bigeye was appealing for this reason. 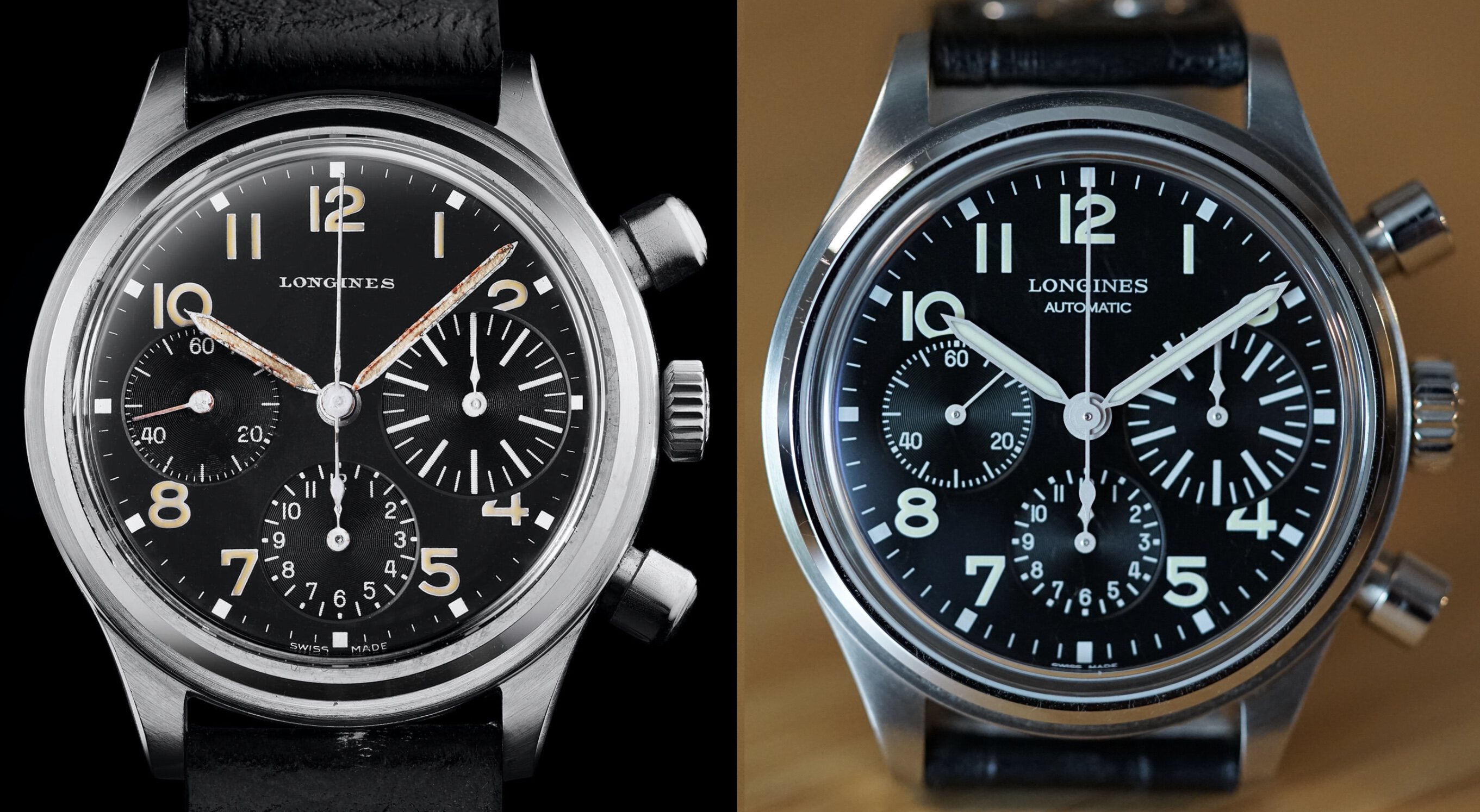 The Bigeye is an accurate recreation of a 1930’s Longines pilot watch. It’s dial is nearly a 1:1 reproduction, and beautifully executed. It’s typically arranged for a chronograph. Central hour and minute hands pass the time with seconds on the 9 o’clock sub-dial.

One thing worth noting specific to the 3 o’clock subdial - its major ticks demarkate 3 minute increments. This was a little hard to get used to when using the watch for timing tasks. When I read a watch I round up or down to the nearest 5 minutes. This habit made it hard to work with the 3 minute ticks. Although it’s truer to history this way, 5 minute ticks would improve legibility. 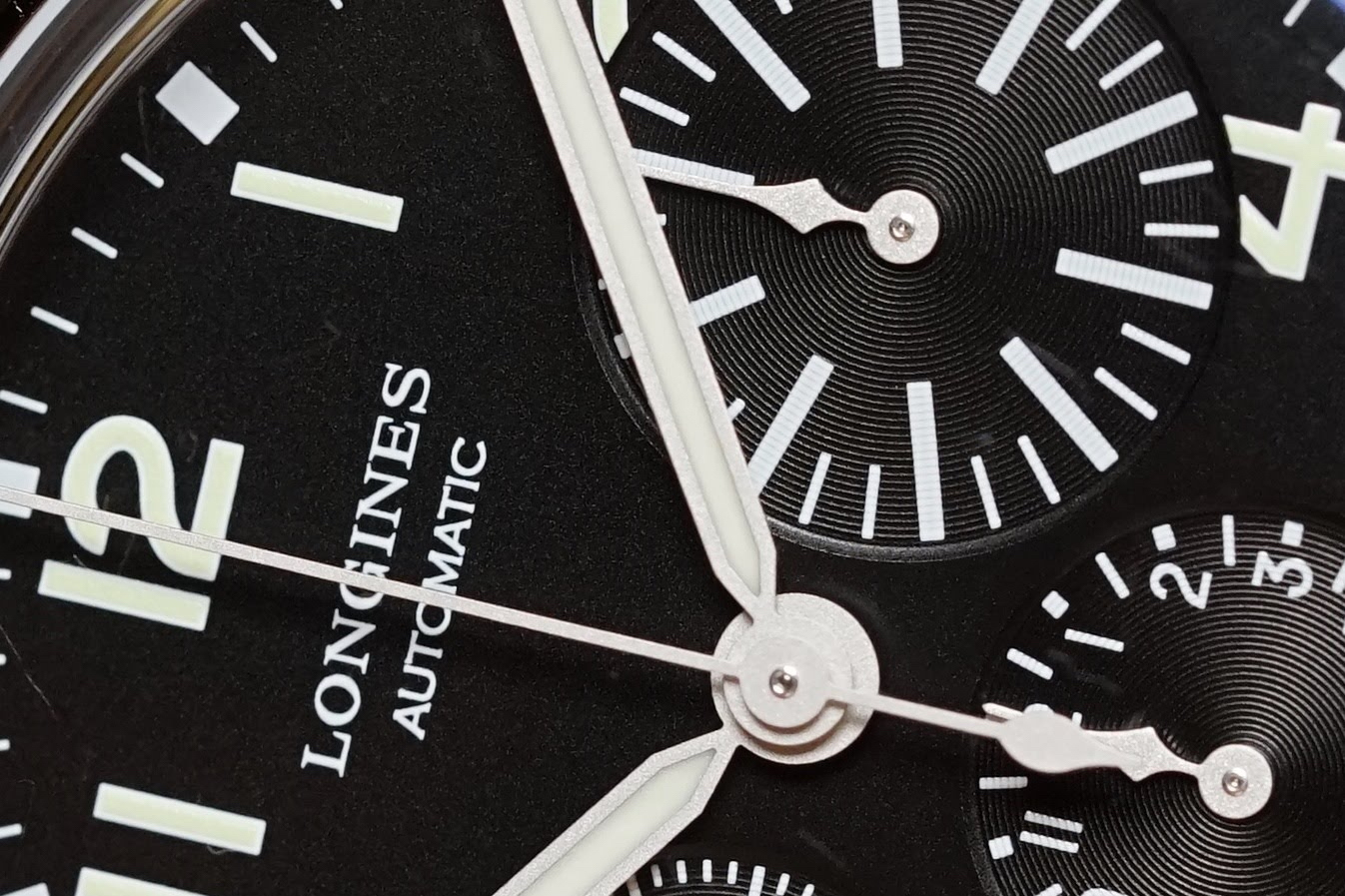 Longines should be praised for their restraint with respect to their choice of lume. So many great heritage releases over the last few years have applied faux patina lume to their dials. In my opinion there is no place for faux patina on a modern watch. Patina is a distinguishment that comes with age not technology. 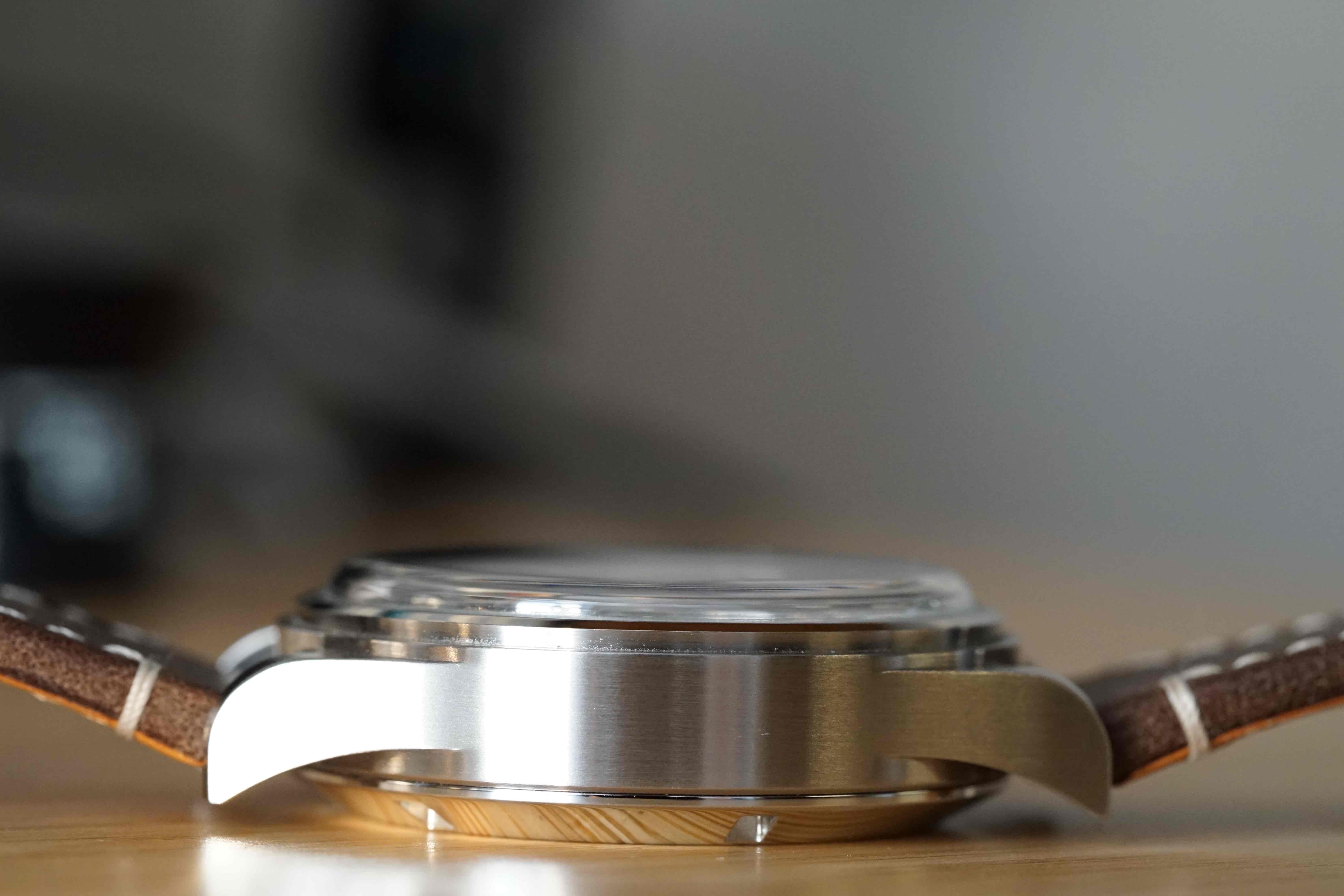 The case of the Bigeye is brushed stainless steel, save for the crown, pushers, bezel and case back. The case weighs in at 88g. Height-wise the watch pushes the upper bounds of 14mm. It’s 41mm wide excluding the pushers and crown and 48mm lug-to-lug. The dimensions are tied together with 20mm lug spacing.

The numbers aren’t deceiving, the watch does feel big on the wrist. That said, a pilots watch being substantial is almost part of the DNA at this point. Wearing this I couldn’t imagine strapping on a 46mm Big Pilot.

The lug design is beautiful on this watch. They stretch out from the middle of the case and quickly slope down towards the wrist. The lugs give the illusion of the watch being a little daintier than it is, and it works really well. The downward slope of the lug makes the strap flow around the wrist. This fact helps make the watch feel a little more managable day-to-day. 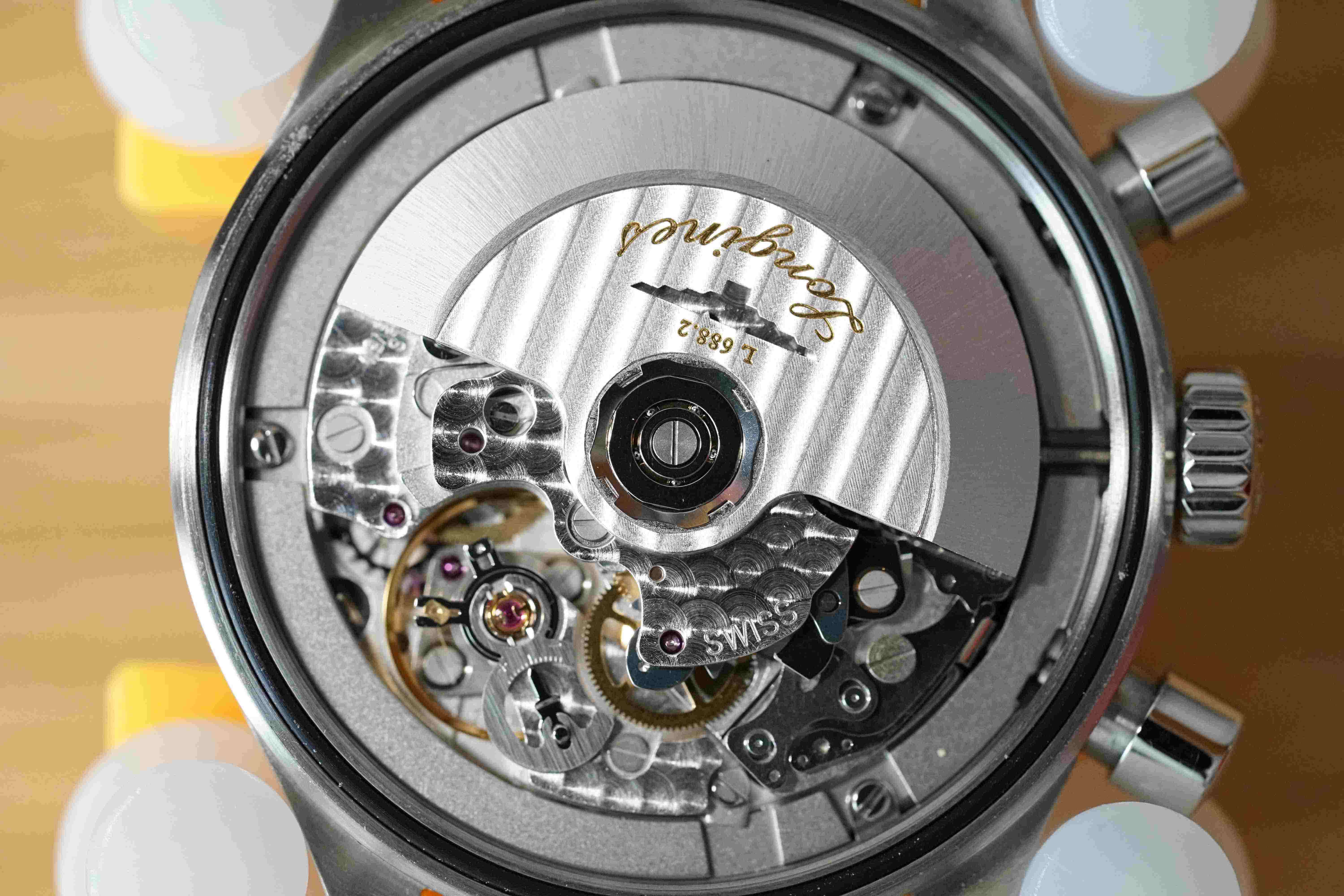 The Bigeye is powered by Longines L688 caliber. The movement was originally born as the ETA A08.L01 designed specifically for Longines. This movement was also the basis for Omega’s 3330 movement. It beats at 28,800 vibrations per hour and has a 54h power reserve. The longer power reserve is enough to get you through a weekend without having to wind the watch on Monday.

You’ll notice on the wrist that when this rotor gets spinning it’ll take the watch for a ride. This effect, rotor wobble, isn’t a big deal but you will notice it. Rotor noise is minimal and it takes a while to slow down.

The chronograph function is smooth, a side effect of the column wheel configuration. Start, stop and reset all are succinct, requiring an even amount of pressure to depress the pushers. Winding the crown to give the movement a boost isn’t a problem, the crown is big enough and well placed.

The A08.L11 performs well, running fast by 3 seconds per day. That’s fine by me - I’d rather me early than late. In hanging positions the amplitude averaged 284°, which is also well within range of good performance. As expected, in flat positions the swing of the balance wheel reaches into the 300 degrees. In most positions the beat error is almost nil. 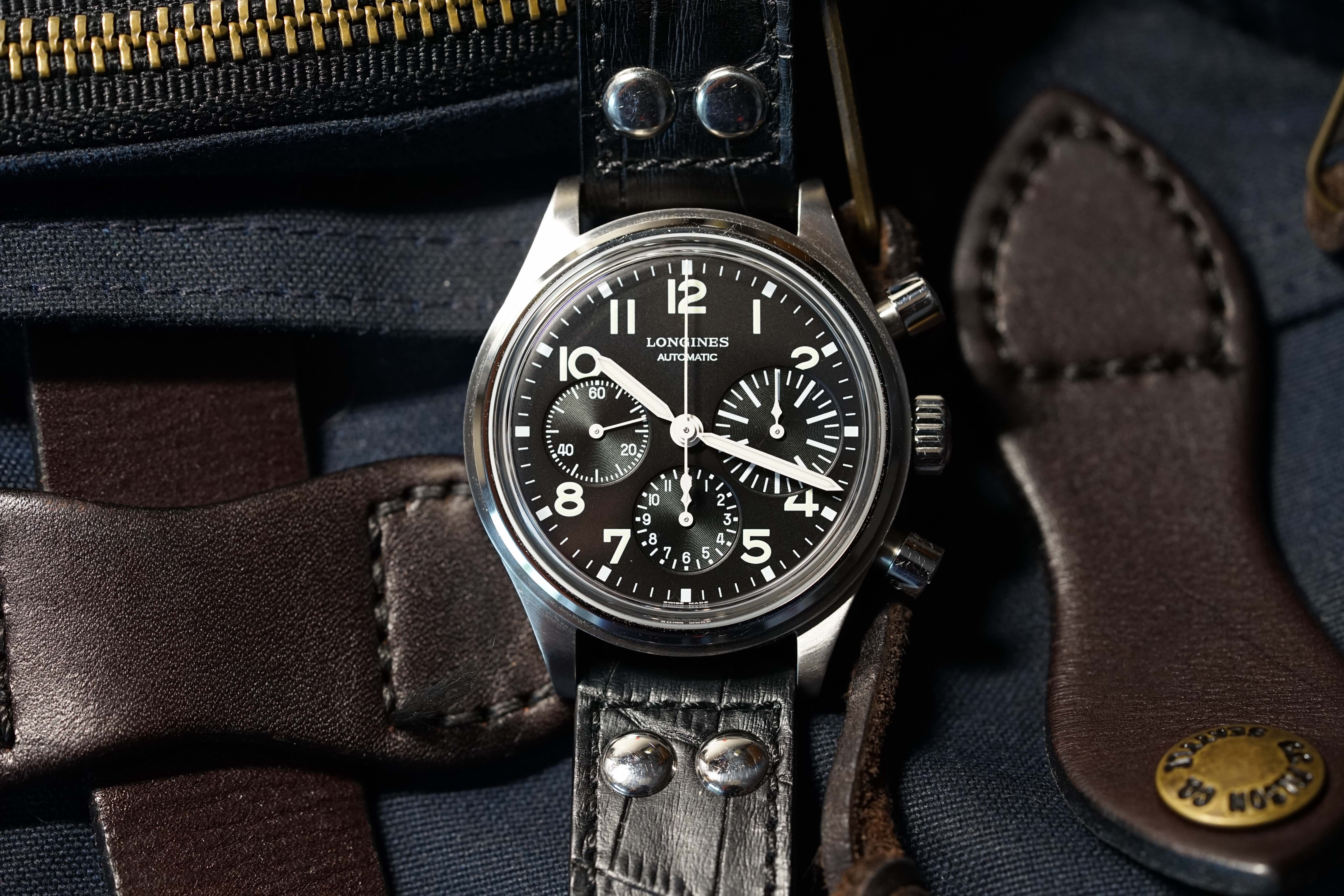 Longines ships the watch on a brown calfskin leather strap and tang buckle. It’s lined with a orange-ish leather band, against the brown outer finish it’s a nice contrast. The tang of this watch is beautiful, with real attention to detail paid in the design. The curves of the tang fit perfectly in the strap when secured to your wrist.

It’s also true that this watch goes supremely well with any pilot style strap option, especially riveted straps. My time with the Bigeye has been split evenly between the Longines strap and aftermarket straps. This watch definitely ticks the versatility box - it looks great on any strap you can find for it. 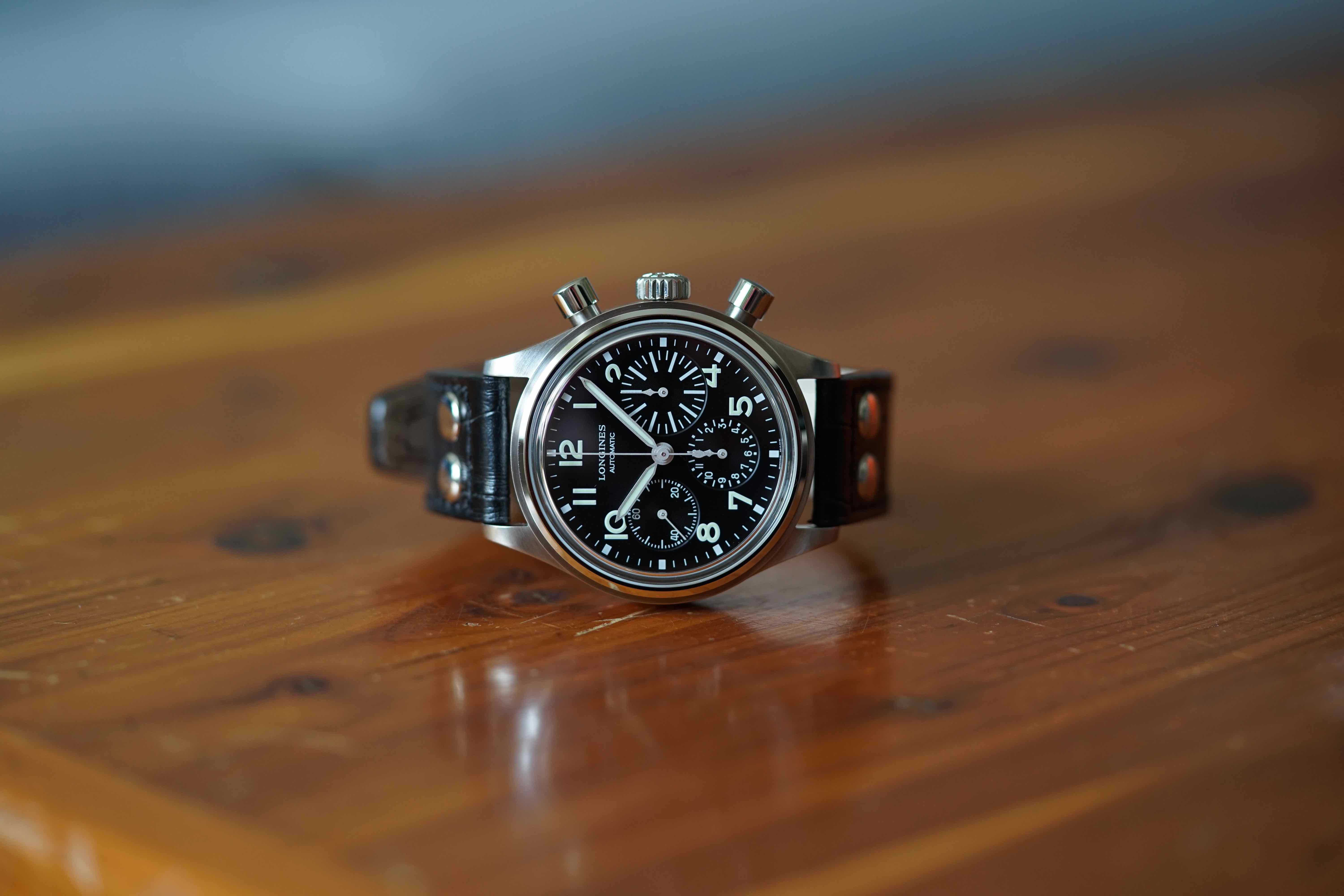